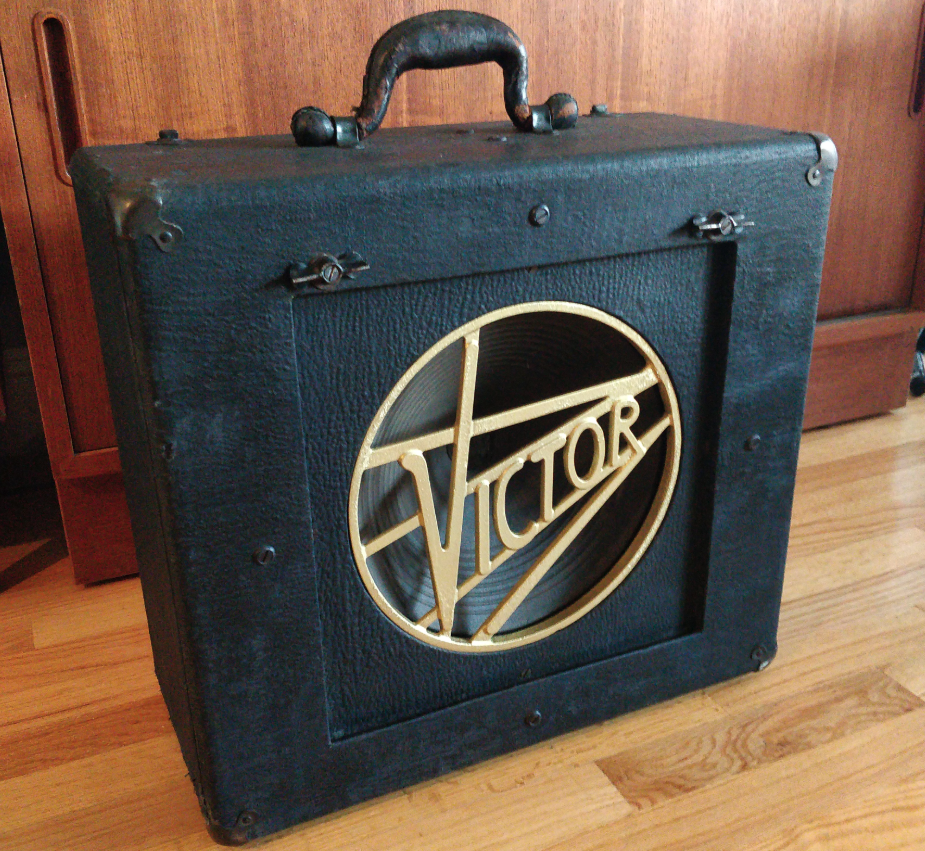 There I was, minding my own business/not buying things when pal Nick Rossi. (who BTW, is a fantastic early jazz guitarist and scholar here in SF worthy of your internet stalking) sent me a Craigslist ad for this:

Oh dear, between this and the Ampro, I might be becoming a bit of a vintage projector speaker cabinet hoarder. Well for obvious reasons, NOT buying something with VICTOR emblazoned on it in the art deco style simply wasn’t an option. Plus, the Ampro has become a permanent home for my Quilter 101 rig. I needed a hot-swappable cabinet for this fantastic Milkman amp I just got. Amp hoarding is another story.

Behind the cab was this enormous transformer on a bracket. This in turn was wired to a tube socket which was jumpered, and what looks like a couple of 2-prong power outlets. Huh? If anyone knows what these are for please do comment in 5th grade english. I tried to google it and glazed over when I read “high voltage step down transformer”, as one does when reading potentially lethal info.

I looked at other folks who have converted these speakers and noticed they were just going directly to the speaker leads. So I yanked the mess out of there, along with some brackets that had some unknown, projector-ey function. The fella (a projectionist) who sold it to me also threw in that cable which is basically two male power plugs on either end. I need to get this cable out of my house before it kills me or a loved one, so do let me know if you want this stuff and would pay shipping.

The speaker was untested, but the cone looked intact so I took the chance when I bought it. Its only markings are J45 and 1561 and it is actually quite light which my aging bones will enjoy. I made a crude input jack out of parts around the house and ran my Milkman amp through it. It sounded awesome, as vintage speakers often do.

To mount the input jack, I opted for not drilling holes in the walls, and quickly whipped together a 90-degree panel mount for switchcraft enclosed jacks and sent it to the trusty 3D printer. I’m getting real fast at this sort of thing. As usual, if you need this model, it’s on Thingiverse.

The cabinet aesthetically was in decently rough shape as you can probably see. I hot-glued some peeling toltex, which may sound a little tacky, but the material inexplicably ate superglue for breakfast and rendered it useless. Combing through some guitar nerd forums, cleaning up scuffed toltex wasn’t too involved and actually my usually-misguided instincts on using a Sharpie marker and shoe polish seemed to be on the money.

Now what about the pièce de résistance: that wonderful “VICTOR” grill? It has some weird dark splotches on it which looked like paint. I rather impatiently tried sanding it off and of course, made matters worse. It became clear I’d need to repaint the whole thing. I didn’t have a matching grey spray paint, but I did have GOLD and laziness prevailed (Lowe’s is walkable, but over a very steep hill). Preservationists might hate me for this, but I think it looks “fire” as the young folks say.

Edit: I have some updates already! Lee Jeffriess thinks the speaker is a relatively unknown Crescent alnico, due to the 15061 possibly referring to the 150 EIA code.

He also consulted amp guru Skip Simmons and confirmed that the extra parts are indeed an output transformer for the amp. The rest of the amp probably lived on the projector. The 2-prong death cable is an early and probably ill-thought-out speaker cable.

According to this great video in which a likeable fella restores one of these (below) the “tube socket” is likely a manual impedance switch. One could change to 4/8/16 ohm by jumpering it in various configurations.

Update 5/15/2020! For… well, reasons… I needed an on-off switch to my speaker cabinet. Whipped this up pretty quick: