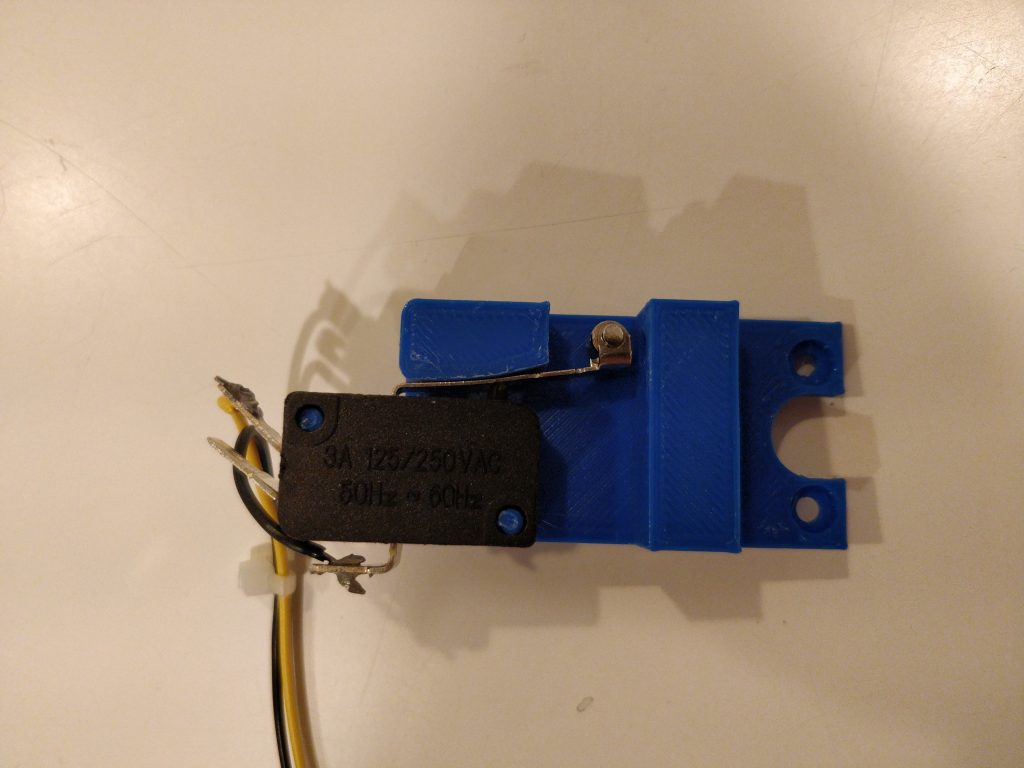 While I’ve never had a spool of filament run out mid-print, it was time to prepare for the inevitable. First, I would need a sensor to detect the scenario. Also, time is usually of the essence if you’d like to save the print and swap in new material, and I figured it would be best to get an instant notification via SMS.

I came up with a solution using my preferred 3D printer interface, OctoPrint. It was a bit involved, so buckle up! This guide assumes you have some experience with basic electronics, 3D printing, OctoPrint, and Raspbian (ssh, shell, GPIO).

You can buy a filament runout sensor for pretty cheap, but I opted to build one with existing parts in my electronics box.

It’s a pretty simple mechanism, you just need a momentary switch, preferably one with a roller to minimize friction. The switch presses up against your filament line and will stay pressed while filament is touching it. When the filament runs out, the switch would be released, triggering the action you want.

For my Creality Ender 3 printer, I found this design on Thingiverse that screws to the z axis. But the roller switches in my parts drawer had a longer lever mechanism, so I remixed the design and stretched it out to fit.

The switch was installed to my Ender 3, and I attached the leads to GPIO4 and GND on the raspberry pi GPIO, simply because they were easy to locate and right next to each other. The connection order or the wires doesn’t matter.

Note that depending on your hardware, you can also wire this sensor directly to your printer’s mainboard and have its firmware handle filament runout detection. But this will only work when you print directly from the board’s SD card reader. It won’t work if you primarily send your jobs through OctoPrint, which we want anyway in order to support SMS notification.

Here it is installed. I run the filament through this housing before it reaches the extruder, I like the open design because I can quickly diagnose any issues here visually:

Next, I needed to figure out how to get my Raspberry Pi to send SMS messages. Now I know there are services like Twilio that offer an API to send text messages, but they aren’t free… so cheapskate that I am, they are out of the picture.

However, I happen to know that most cellular carriers support email to SMS. Here are sms domains of the major US carriers, but you can google for your own. Replace <phone_number> with your full phone number and send yourself a text through your sms email address:

Note 6/11/2020: According to commenters: “ssmtp isn’t supported in raspbian-buster (and fails to send to gmail at least). msmtp works for me though”

Next on your Raspberry Pi hosting OctoPrint, log in to the console and and install a couple of packages:

You’ll then need to edit a configuration file with your email host providers smtp settings.

I use gmail, so here’s how I configured the file. If you use a different email service you’ll need to hunt down your own SMTP settings (replace appropriate fields with your own data):

Note that if you 2FA, you may need to set an app-specific password on google for this.

Now go ahead and give this a try by going back to the command line and sending a test SMS using the following command. You should see a text message pop up on your phone:

Now we need to have OctoPrint handle the filament runout detection, and then send an SMS. We’ll need a couple of plugins for this. Install the following plugins by navigating to: OctoPrint Settings > Plugin Manager > Get More.. (scroll all the way down) > Search…

You’ll need to restart your OctoPrint server once they have installed.

This plugin allows us to respond to action alerts in the gcode of the print job. Namely: M118 //action:<action_name> commands. When these commands are sent, the plugin can detect them by their <action_name>. Then it can execute shell scripts, and thus trigger the system to do anything we want. In our case, this will send an SMS notification using a shell command. This might not make sense in context yet, but stay with me here!

I added three different command definitions: start, interrupted, and done. Then I added the shell scripts I want triggered on each action, respectively:

echo “Print was paused. Out of filament?” | mail <my_sms_email_address>

Here is a shot of the OctoPrint settings screen:

Next we will configure the filament sensor plugin to trigger a pause action on filament runout.

Next, we’re going to add some additional GCODE actions for when the print starts, pauses, and completes. These will trigger the action commands we configured above, and also move the print head out of the way on pause.

While I was doing all this configuration, I thought why not set the following optional SMS notifications for when my job starts and completes:

Now you will also want some actions on pause and resume. On pause, I want the SMS notification sent, but I also want the print head to move up so I can get in there and clean away oozing filament with a tweezer before I feed in the new spool.

After a print job is paused:

Before a print job is resumed:

Here is the full screen:

Whew! That should be everything you need. Fire off a print job. If you configured things exactly like above, you should get a SMS that the print job started right away.

To test filament runout, you can simply snip the filament line just before the sensor. Once the filament gets drawn past the switch, this closes the circuit and triggers a pause. Once again, you should get an SMS. Pull out the remaining filament, and feed in a new spool. Then clean away any strings and blobs from the surface of your print with tweezers. Press resume in OctoPrint (but not on the printer) and watch as the print job happily continues!

Note that this actually sends the SMS on pause, not strictly on filament runout. I tried to configure the “out of filament GCODE” on the sensor plugin, but I couldn’t get it to work.

Another SMS notification I’d like to see is one on thermal runaway detection. Sure would be nice to know if your printer appears to be malfunctioning in a way that might burn down your garage. Octoprint doesn’t seem to have a field for this.

If anyone knows how to set these up, let me know!