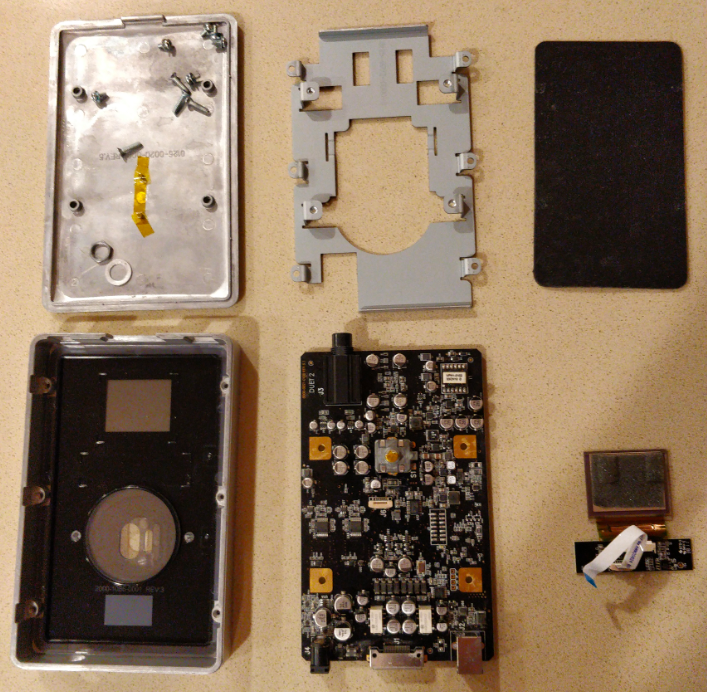 I recently returned from a nice week-long art residency along the northern California coast. My primary goal during this time was to record some solo jazz guitar. Imagine my dismay when I plugged in my Apogee Duet 2 interface on the first night and it didn’t turn on.

After an hour or so furiously swapping cables and downloading drivers, I discovered that it was indeed “working” and being detected by the system. That is, the inputs and outputs of the unit were functional. But the OLED screen that usually showed meter lights and other UI was busted.

Well luckily, you can do most of what you need with this thing in software using Apogee’s “Maestro” drivers and some might agree it’s a better overall UI experience. So I was able to get some recording done that week after all. But of course, the broken-ness of it all got under my skin and I started researching how to fix this out-of-warranty $300 future paperweight.

This guide serves to show you

a.) literally how to fix the OLED screen on an Apogee Duet 2 (I hope google sent you here!) ,and

b.) demonstrate how you, normal person with little-to-no knowledge of electronics can approach fixing your stuff

Can I repair stuff like this? It looks hard

Thanks to device miniaturization and the rise of board-mounted components, the ability to easily service a device is a dying luxury. Sure you get a compact iPad, but the trade off is you cant change the screen without a heat gun, a ton of patience and a plastic prying tool you never knew existed called a “spudger”. Of course getting professional help is preferred if you can but if you’re out of warranty, then repairs can cost up to or more than replacing it entirely. No thanks, says I, the frugal musician. Plus buying new things has environmental cost. Don’t forget that!

Generally, you can be relatively certain that most electronic gizmos were built with the same pile of Chinese-made components that everyone else has access to. Especially things like sensors, input/output jacks, and yup… screens.

That being the case, if you’ve narrowed down the problem to one of these things, you can replace just that component… usually really cheaply! Big components that receive a lot of wear/use are usually designed to be serviced/replaced and thus attached with large solder joints or detachable cables.

However, if a microscopic board-mounted resistor, capacitor, microchip, or transistor goes bad you’re probably out of luck. Diagnosing and then removing those gets super-advanced and you need really expensive tools. I wouldn’t bother.

First thing, take it apart. If it looks like your device doesn’t have screws, they are probably just well-hidden. Look for long, deep cavities. They might be in there. Or sometimes if your device has a battery drawer, they can stash some screws in there. Finally, if the device has rubber feet or stickers, peel them back and you might find them there.

Case in point, peel back the rubber mat on the bottom of the Duet 2 and you’ll find them:

Once you find the screws, hopefully they are a standard phillips (cross) or flathead. If they are some weird star shape, you gotta buy the right screwdriver. Also, don’t use a phillips head that is smaller than that of the screw. A screw tip should fit perfectly with no horizontal play. Generally speaking, do NOT try shoving a screwdriver that looks “close enough” into an unfamiliar screw or you’ll really SCREW things up (hah).

Google your device + screws and you’ll probably get the exact bit you need. Or just buy a cheap 63-in-one megapack of device repair bits from Amazon and the whole device-innards world becomes your oyster.

The back panel popped right off, but try as I might I couldn’t pull the circuit board out. This brings up an important point: DON’T FORCE ANYTHING TO OPEN. Usually when it won’t come apart easily, you’re missing some “trick”. Maybe a hidden screw or a retaining tab. In this case, I found that you must remove the volume knob before the board will come out.

The knob, which is allegedly a D-style shaft like you’d see on a volume pot, was as stubborn as they come and I couldn’t pull it out with my fingers alone. I struggled too much with this before realizing I could pry it with two sharp 1mm guitar picks on both sides. Another thing: don’t use metal, like a flathead screwdriver, to pry things or you’ll leave nasty marks and cracks. Guitar picks are great for this sort of thing and I’ve even seen iPad repair kits ship with them.

I positioned the guitar picks like so and levered them on both sides:

After getting the knob off it was clear it had been glued in. Another thing you’ll find: usually manufacturers don’t want you in there. Still, we soldier on. Under the knob was a nut securing the knob shaft to the case. I removed it with a monkey wrench and finally the board came out.

There was ribbon cable running from the main board to a smaller board which had the touch-sensitive buttons and the attached screen. I removed it by pulling up on the small plastic retaining housing to release its grip. Again, don’t just try to yank cables out if they wont go. There’s usually a little housing or tab you pull to release them.

Assessing the damage to the screen

Yeah, that doesn’t look so good. You can see the burn-in from the icons. And the middle of the screen is “melted” away. You can actually see straight through to behind the screen. So I am pretty certain this is the problem. If I replace it, we should be good!

Next, I had to find the part number for this screen. This is the thing you search for to find the replacement. There were lots of numbers all over this thing, most of which came up with nothing on google. However, I kept trying and of course it turned out to be the longest, tiniest, most complex number on there.

Turns out, the screen is an “UG-6028GDEBF01”. Googling turned up some pages with datasheets and even some retailers which is promising. The manufacturer is “WiseChip”.

Alibaba linked a few suppliers that would sell it in single units, and the part cost under $20. Problem is, shipping alone for one of these was $42! Do we have any other options?

A related match on google also turned up the UG-6028GDEBF02, which looks like the next generation of this apparently obsolete screen.

Comparing some datasheets on the two screens, they have the same amount of pins on the cable, almost identical dimensions (the new one is slightly thinner), and the same operating voltage. The new screen has better specs though, like better contrast and brightness. My perhaps naive guess is that when these manufacturers new hardware revisions out, they prioritize being backwards compatible so as to not totally derail companies that already designed their hardware for the old one. WiseChip’s site provides this somewhat reassuring copy:

WiseChip announced the replacement of full-color product, 1.69 inch which model name is UG-6028GDEBF02 are being substituted for UG-6028GDEBF01 since the fourth quarter of 2010… Undoubtedly, customer can easily adopt the inheritable model, UG-6028GDEBF02, to application device, so that assures customer can be scheduled on time for mass production.

Sure enough, it worked! Since I already knew how to disassemble the device, installation was a snap. I stuck on a thin layer of scrap foam behind the screen with double-sided tape to protect it from the metal housing, just like the old screen.

In conclusion, you may safely install the $20 WiseChip UG-6028GDEBF02 as a replacement screen for the Apogee Duet 2. Hope that saves you some cash!